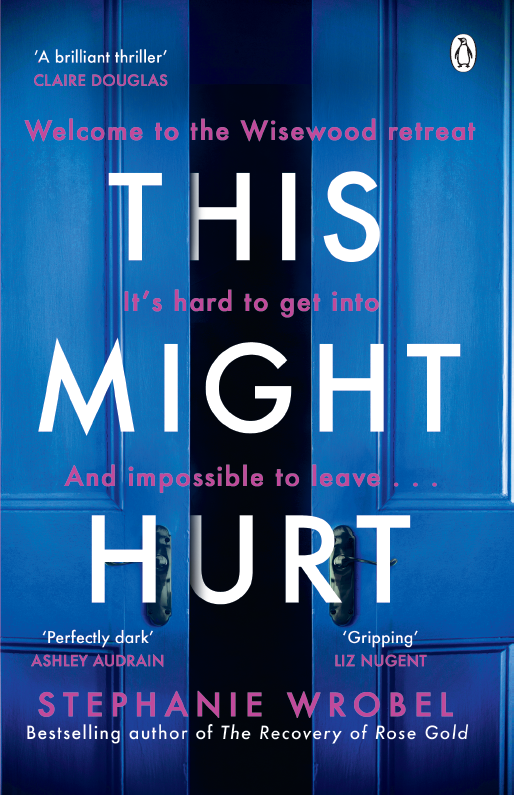 We couldn’t be more pleased that This Might Hurt by Stephanie Wrobel is published in UK paperback today (Penguin / Michael Joseph).

Described as ‘jaw-dropping’ and ‘twisted in all the right places’, This Might Hurt is a thrilling novel about power, secrecy, and guilt, set against the backdrop of a menacing cult and exploring the complex relationship between two sisters.

Stephanie’s debut novel, The Recovery of Rose Gold, was a Sunday Times, USA Today, and Globe and Mail bestseller, and was a Richard and Judy Book Club pick (February 2021). The hardback edition of This Might Hurt published earlier this year to much fanfare, and was an Amazon’s Best of the Month in Thriller and Mystery (March 2022), as well as a Sunday Times Crime Club star pick. MailOnline called it ‘a tonic for readers of thrillers’, and This Might Hurt has received fabulous reviews since publication, some of which are below:

‘I don’t know if blood is thicker than water, but I know that my blood ran cold at several points reading this book. Filled with menace, this was a gripping and compulsive read from first page to last. I thought I’d never get off that island!’ Liz Nugent

‘Deliciously dark and so very clever, This Might Hurt is a tense, unsettling and twisty read. I was gripped from beginning to end. I felt like I was on the island with them! A brilliant, heart-thumping and compulsive thriller.‘ Claire Douglas

‘This Might Hurt is a mesmerizing and original ride…Expertly paced, hugely unsettling, and perfectly dark, you’ll be gripped in this clever exploration of fear and vulnerability right until the flawless ending.’ Ashley Audrain

Congratulations on this paperback publication, Stephanie! We are obsessed with the stunning new cover, and are so excited for more readers in the UK to discover the unsettling world of Wisewood…