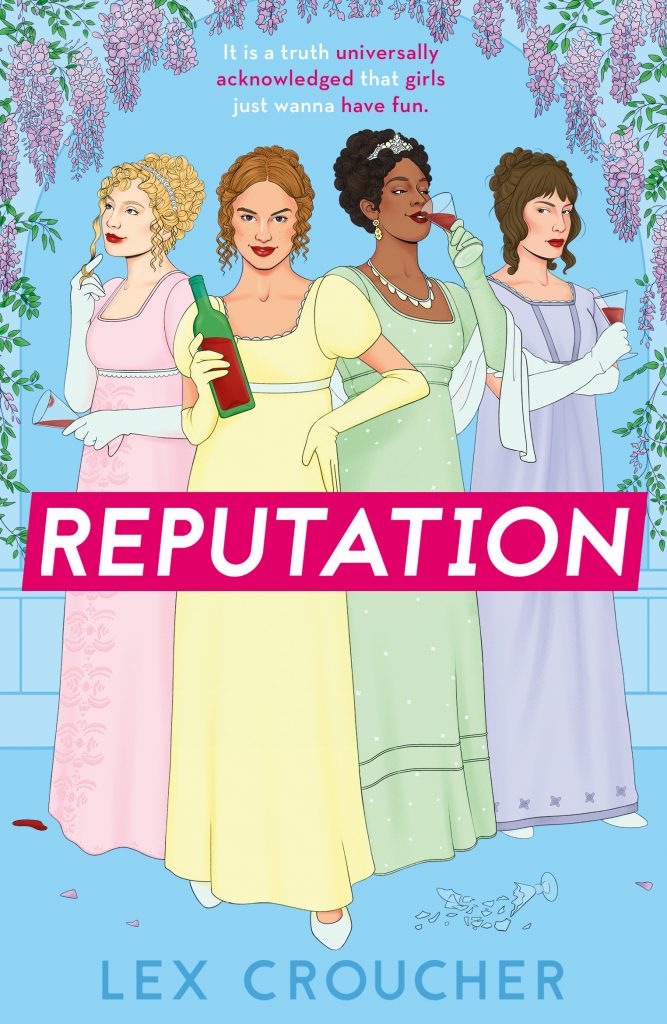 Dearest readers, if you’re looking for a raunchy new read to fill that Bridgerton-shaped hole in your life, then you’re in for an absolute treat! Lex Croucher‘s debut, Reputation, is published today by Bonnier Zaffre!

Predictably, this delicious new title is already the talk of the town, with glowing praise from fellow authors like bestselling romcom writer Cressida McLaughlin, who called it “fierce, fresh and feminist”. It’s also been hand-picked for features in popular publications like Red magazine’s best July releases. And just recently, it received a starry review in Evoke, where it was crowned “Mean Girls meets Jane Austen“. Don’t forget that you can join us tonight at 7.30 to celebrate this book birthday in style, where Lex will be in conversation with booktuber Sanne Vliegenthart, also known as Books and Quills!

As if you need any more reason to press ‘Buy’ – have a look at the jacket. Who wouldn’t want this beauty on their shelf?

right. well. it’s publication week!! my debut novel is out on Thursday. not too late to get a sneaky pre-order in – you can grab a signed & dedicated copy from @WELBooks and have it sent to you anywhere in the world: https://t.co/JhbRgOt5Sk pic.twitter.com/Lhst0KdYO9

In this sharp-witted rom-com that would definitely give Ms Austen a giggle, Georgiana is the bored new girl in town, who’s left reeling when she finds herself in the glittery epicentre of the upper-class ‘in-crowd’. But these high society teen queens are far from demure…

“It all began at a party, as almost everything of interest does.”

Abandoned by her parents in favour of a sea view, middle class Georgiana Ellers has moved to a new town to live with her dreary aunt and uncle. At a particularly dull dinner party, she meets the enigmatic Frances Campbell, a wealthy socialite and enchanting member of the in-crowd.

Through Frances and her friends, Georgiana is introduced to a new world of wild parties, drunken debauchery, mysterious young men with strangely alluring hands, and the sparkling upper echelons of Regency society.

But high society isn’t all it’s cracked up to be, and the price of entry might be more than Georgiana is willing to pay . . .

The early response has been mammoth so far, with readers clamouring for more of this juicy page-turner:

“A spirited Regency romcom, which tears up the Regency romcom rulebook! If Bridgerton and Fleabag had a book baby, it would be Reputation. I inhaled it in one sitting” – acclaimed writer and journalist Sarra Manning

“I thoroughly enjoyed Reputation. I had so much fun reading it. It’s a total blast” – bestselling YA author Louise O’Neill

“Regency setting, intriguing characters that you easily become invested in, plenty of twists and turns, and a satisfying conclusion. Is it too early to ask for a sequel??” Goodreads reviewer, 5 stars

“Mmm, a deliciously satisfying romance with a fantastic set of characters, a lot of heart and a delightful amount of regency-era melodrama.” Goodreads reviewer, 5 stars

“Regency just got a little more rebellious… Bridgerton’s much-deprived and raunchier younger sister, Reputation is guaranteed to leave you fanning yourself and snorting with laughter!” Goodreads reviewer, 5 stars

Reputation is an absolute must for your summer TBR – so don’t miss out! Bag yourself a copy right now – you’ll thank us later.