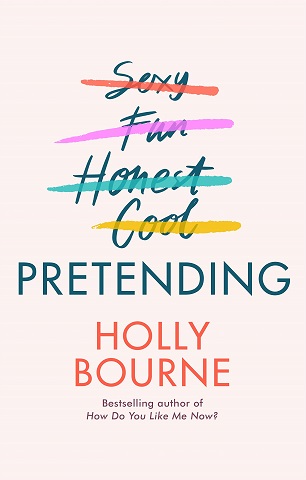 Pretending flew to the top of the charts following its UK hardback publication back in April; claiming the No.1 spot on Apple’s audiobook chart and peaking at No. 7 on the Kindle chart.

At the time of its release, the title was featured as one of the ‘Best Fiction Books Coming Out in 2020 by Female Authors’ in Platinum Magazine, named ‘One to Watch’ in the Bookseller’s April Preview, and featured in Cosmopolitan‘s round-up of 6 unputdownable books to read in May. Holly also joined an Author Special of  the stellar podcast, The High-Low, for a deep-dive into the book’s themes.

Have you ever felt the pressure to be perfect? Our protagonist April certainly has, and we can definitely relate…

He said he was looking for a ‘partner in crime’ which everyone knows is shorthand for ‘a woman who isn’t real’.

April is kind, pretty, and relatively normal – yet she can’t seem to get past date five. Every time she thinks she’s found someone to trust, they reveal themselves to be awful, leaving her heartbroken. And angry.

Gretel is exactly what men want – she’s a Regular Everyday Manic Pixie Dream Girl Next Door With No Problems.

The problem is, Gretel isn’t real. And April is now claiming to be her.

As soon as April starts ‘being’ Gretel, dating becomes much more fun – especially once she reels in the unsuspecting Joshua.

Finally, April is the one in control, but can she control her own feelings? And as she and Joshua grow closer, how long will she be able to keep pretending?

The book has received a host of incredible reviews:

We were also delighted to see Pretending on the longlist for the Comedy Women in Print Prize!

You can pick up a copy of the pretty paperback here, you definitely won’t regret it!