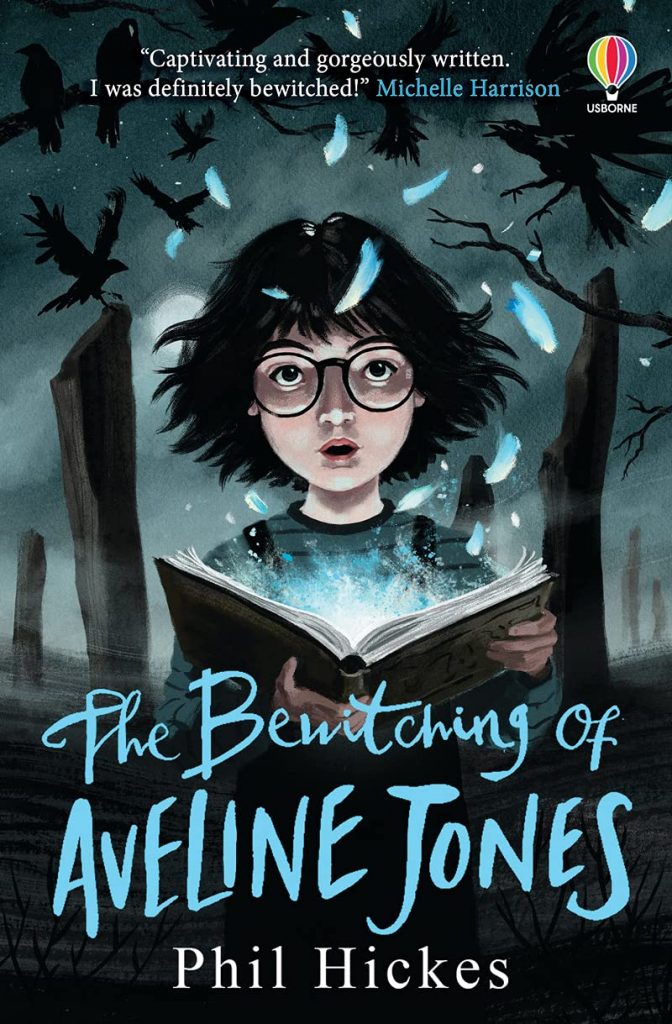 Looking for a creepy new bedtime read? You’re in luck: the second instalment in Phil Hickes‘ terrifying Aveline Jones trilogy, The Bewitching of Aveline Jones, is published today by Usborne!

Since its launch last autumn, Aveline Jones has been a hit with readers, having been chosen for BookTrust’s ‘Bookbuzz’ 2021 programme, and picked up in both adult and children’s publications, including The Times and The Week Junior. Celebrated children’s writer, Michelle Harrison, called the first title, The Haunting of Aveline Jones, “One of the best middle grade ghost stories I’ve read” – high praise indeed! And book 2 is already attracting buzz, like a shout-out on kidlit connoisseur Scott Evans‘ YouTube channel!

WIN: 3 copies of The Bewitching of Aveline Jones by @Hickesy over on my blog. Perfect for the upcoming spooky season! Fabulous cover by @RobinsonKH https://t.co/09PFSwzkMg pic.twitter.com/dluGQtEbvf

Join Aveline as she embarks on a new adventure, with new friends, and (of course) a terrifying new mystery to solve:

Turn on your torches and join Aveline Jones! Aveline is thrilled when she discovers that the holiday cottage her mum has rented for the summer is beside a stone circle. Thousands of years old, the local villagers refer to the ancient structure as the Witch Stones, and Aveline cannot wait to learn more about them. Then Aveline meets Hazel. Impossibly cool, mysterious yet friendly, Aveline soon falls under Hazel’s spell. In fact, Hazel is quite unlike anyone Aveline has ever met before, but she can’t work out why. Will Aveline discover the truth about Hazel, before it’s too late? The second in a deliciously spine-tingling, spooky series, where mysteries are always solved, spirits are always laid to rest, and everybody gets to bed on time.

Early readers have already fallen under this book’s spell – and we’re sure there’s many more where that came from:

“This is a proper spine-tingling, goose-bump inducing read for readers aged nine and up. Those who want a read that takes them out of their comfort zone, will have them watching over their shoulder and sleeping with the light on won’t want to miss this one” Goodreads reviewer, 5 stars

“Oh my gosh this story is so good and eerie, I love a good witch story and this focus on the lure, the magic, the druids, the witch stones and what a witch is truly capable of doing.” Goodreads reviewer, 5 stars

“I was thoroughly bewitched! Phil Hickes had me under his spell from the very first chapter. This is spooky storytelling at its spine-chilling best with a plot so powerful it has the ability to completely enchant you. I was helpless to resist it’s charms, totally entranced, unable to tear myself away.” Goodreads reviewer, 5 stars

Born in the UK, Phil now lives with his wife in Portland, Oregon.

He graduated with an English Literature degree from Middlesex University, and currently works as an advertising copywriter. He has a passion for horror, ghosts, and all things that go bump in the night, which led him to do an online fiction writing course with the horror author, Jeremy C. Shipp.

His first short story was featured in an adult horror anthology, and he has since had several short stories published in anthologies in the adult genre. He turned his hand to writing middle grade as he wanted to create the same visceral thrill he remembers from reading Alan Garner, Clive King and Roald Dahl. The Haunting of Aveline Jones is his first middle grade novel.

Congratulations, Phil, on another spooktacular read!