Malice in Underland: A Trick of Time is published today by Scholastic 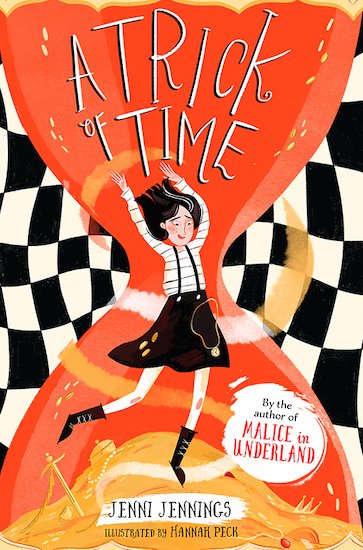 Spooky season is nearly upon us, which means it’s time for the second instalment in the Malice in Underland (Scholastic) series by the wonderful Jenni Jennings!

A Trick of Time is the second title in this terrific Middle Grade trilogy. Readers from all over the world are still falling in love with Jenni’s expertly spun series – including, most recently, in Spain:

Malice in Underland is being published in Spain! I am absolutely thrilled 😁 Thank you @PrimaveraFraijo for recommending Malice for Spanish readers. You are a star 🌟🧡 https://t.co/8xJL4dxuhM

We know you’re keen to find out what happens to Malice Morbid Malign following her last (mis)adventure – prepare yourselves for a twisty race against time!

Malice Morbid Malign isn’t like the rest of her family.

But when her younger sister Antipathy-Rose finds a sphere of solid Amber in one of the forbidden swag rooms at Malignant House, and bites right through it, she unwittingly unleashes a world of trouble. Trapped within the Amber sphere is Maniacal Malign’s time-stopping pocket watch.

Maniacal Malign had been in exile for several centuries but the moment Antipathy-Rose’s gnashers crack the Amber, he is summoned back to monstrous action. Malice, Uncle Vex and Seth find themselves on a time-sensitive mission, as they race to retrieve the pocket watch, whilst unravelling Maniacal’s malevolent mischief along the way.

And if you want an inkling of what’s to come, have a look at what readers thought of the first book in the series…

“This was such a fun cute read!! I really loved it! It’s gothic, fun spooky, funny, & amazing. I loved Malice. She was such a fun character. The whole plot was different & such a page turner.” Goodreads reviewer, 5 stars

“Looking forward to the rest of this series and more from Jenni Jennings – I ADORED this book!! It was SO MUCH FUN to meet the Maligns and all the other characters! The book had great nonsensical and Dickensian vibes!” Goodreads reviewer, 5 stars

Jenni Jennings lives in a small seaside town in the UK with her husband; their children having left home for big adventures. She went to university aged 39 to study part-time for a degree in Creative and Professional Writing, and for the last 7 years, Jenni has been baking cakes for a coffee shop where she lives. Jenni likes long walks, baking days and is obsessed with stationary. She doesn’t believe in saving things for best and shamelessly wears party dresses to the supermarket. Malice in Underland is Jenni’s debut middle grade series. Jenni also writes adult fiction under the name Jenny Bayliss.

Jenni’s latest book is packed full of adventure, comedy and – most importantly –  mischief! We’re sending her a massive congrats on another spooktacular story.