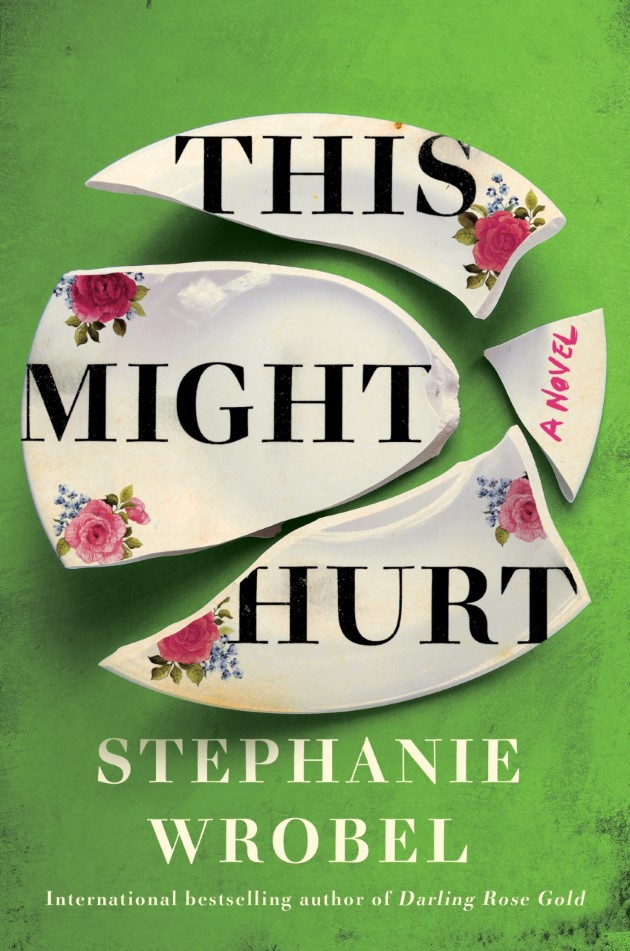 We are unbelievably excited to announce that Stephanie Wrobel‘s mesmerising second novel This Might Hurt, one of the most highly anticipated reads of 2022, publishes today in the US and Canada (Penguin Random House).

The USA Today bestselling author’s debut The Recovery of Rose Gold (UK) / Darling Rose Gold (US) utterly captivated readers when it published in 2020, with reviewers calling it ‘compelling’, ‘explosive’, and ‘whip-smart’. Stephanie Wrobel’s new offering This Might Hurt is a thrilling novel about power, secrecy, and guilt, set against the backdrop of a sinister cult. We cannot wait to see Stephanie’s second novel take the world by storm!

The countdown to publication has been almost as gripping at the novel itself, with This Might Hurt included in roundups by Shondaland, USA Today, Bustle, Buzzfeed, Newsweek, E! Online, Parade, PopSugar, Bookbub, Crime Reads, Katie Couric Media, Betches, Criminal Element, and many more. The New York Post labelled This Might Hurt ‘required reading’, and Kirkus hailed it as ‘a taut thriller that examines the twin legacies of trauma and grief’:

You can read some more of the fantastic early reviews of This Might Hurt below:

‘Wrobel once again proves to be a master at crafting thrillers.’ Shondaland

‘This Might Hurt is a mesmerizing and original ride! Expertly paced, hugely unsettling, and perfectly dark, you’ll be gripped in this clever exploration of fear and vulnerability right until the flawless ending—one you’ll most certainly want to talk about.’ Ashley Audrain, New York Times bestselling author of The Push

‘A gut wrenching, propulsive story about vulnerability and power. It was impossible to put down.’ Tarryn Fisher, New York Times bestselling author of The Wives

‘Wrobel has honed her writing style even more sharply since her strong debut novel Darling Rose Gold…This Might Hurt contains moments and characters recognizable to those familiar with the NXVIM cult and its downfall, although the twists and turns are all Wrobel’s own, and will leave readers guessing until the very end.’ Booklist

‘Wrobel explores themes of grief and guilt, and proves a deft chronicler of the language of trauma and recovery…With shades of Brit Bennett’s The Vanishing Half and Liane Moriarty’s Nine Perfect Strangers, This Might Hurt is a tense psychological thriller with an eye towards larger themes.’ PureWow

We cannot wait for you to meet the Collins sisters…

Welcome to Wisewood. We’ll keep your secrets if you keep ours.

Natalie Collins hasn’t heard from her sister in more than half a year.

The last time they spoke, Kit was slogging from mundane workdays to obligatory happy hours to crying in the shower about their dead mother. She told Natalie she was sure there was something more out there.

And then she found Wisewood.

On a private island off the coast of Maine, Wisewood’s guests commit to six-month stays. During this time, they’re prohibited from contact with the rest of the world—no Internet, no phones, no exceptions. But the rules are for a good reason: to keep guests focused on achieving true fearlessness so they can become their Maximized Selves. Natalie thinks it’s a bad idea, but Kit has had enough of her sister’s cynicism and voluntarily disappears off the grid.

Six months later Natalie receives a menacing e-mail from a Wisewood account threatening to reveal the secret she’s been keeping from Kit. Panicked, Natalie hurries north to come clean to her sister and bring her home. But she’s about to learn that Wisewood won’t let either of them go without a fight.

Congratulations on this hugely exciting day, Stephanie! Readers in the US can purchase their copy of This Might Hurt here.