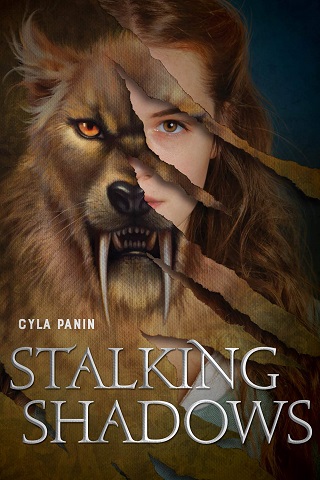 As the nights grow darker and Halloween creeps nearer, we’ve got the perfect read for those of you who love a good scare – Cyla Panin‘s gorgeous debut, Stalking Shadows, is released today by Abrams.

Promising chills and thrills, Stalking Shadows has been hotly anticipated since its announcement. The book, which offers a fresh spin on Beauty and the Beast, was called “both beautiful and brutal” by Kirkus. It was also featured in Nerd Daily’s roundup of gripping dark YA fantasies. And (not that we’re biased) it has the coolest cover – have a look at Cyla’s reaction to seeing it in the flesh!

Cyla’s writing drips with tension and intrigue, as we follow two young sisters in a tiny French town, who are concealing a deadly secret…

Seventeen-year-old Marie mixes perfumes to sell on market day in her small eighteenth-century French town. She wants to make enough to save a dowry for her sister, Ama, in hopes of Ama marrying well and Marie living in the level of freedom afforded only to spinster aunts. But her perfumes are more than sweet scents in cheap, cut-glass bottles: A certain few are laced with death. Marie laces the perfume delicately–not with poison but with a hint of honeysuckle she’s trained her sister to respond to. Marie marks her victim, and Ama attacks. But she doesn’t attack as a girl. She kills as a beast.

Marking Ama’s victims controls the damage to keep suspicion at bay. But when a young boy turns up dead one morning, Marie is forced to acknowledge she might be losing control of Ama. And if she can’t control her, she’ll have to cure her. Marie knows the only place she’ll find the cure is in the mansion where Ama was cursed in the first place, home of Lord Sebastien LaClaire. But once she gets into the mansion, she discovers dark secrets hidden away–secrets of the curse, of Lord Sebastien . . . and of herself.

Fellow authors, reviewers and critics alike have been singing the praises of Cyla’s gorgeously gothic style:

“Dark and mesmerizing, Stalking Shadows is a story with both heart and bite. An atmospheric tale, it features carefully crafted characters, a deadly secret, and a mysterious magic that kept me enraptured from page one.” Jessica S. Olson, author of Sing Me Forgotten

“Panin’s debut features rich, complex teen characters, all fighting to be understood within the limits of their small, closed-minded town. A fairy-tale retelling that’s both beautiful and brutal.” Kirkus

“Stalking Shadows has everything I love in a story: a fierce heroine, a gorgeously spooky atmosphere, and a perfectly Gothic aesthetic. With perfume magic, snowy forests, a brooding lord, and a girl who becomes a beast, this is a retelling the way retellings should be done.” Goodreads reviewer, 5 stars

“I was enchanted from the moment I picked this up and now officially want to go live in the 1800s in a little cottage sitting by a cosy hearth all day. I was living for the gorgeous atmosphere throughout.” Goodreads reviewer, 5 stars

“This gothic beauty was such an absolute pleasure to read and there was so much to love. The perfume magic, witchcraft, foreboding forests, a ticking clock with a killer on the loose, and the vivid visceral descriptions in this book kept me flipping through the pages long after I told myself I would go to bed at night.” Goodreads reviewer, 5 stars

Cyla Panin lives in Canada with her husband and two sons. She has a Bachelor of Arts in English with a concentration in Creative Writing from Mount Royal University. Stalking Shadows is her debut novel.

We’re sending a massive congratulations to Cyla on the first of many artful, mesmerising stories! We can’t wait for readers everywhere to witness her magic!