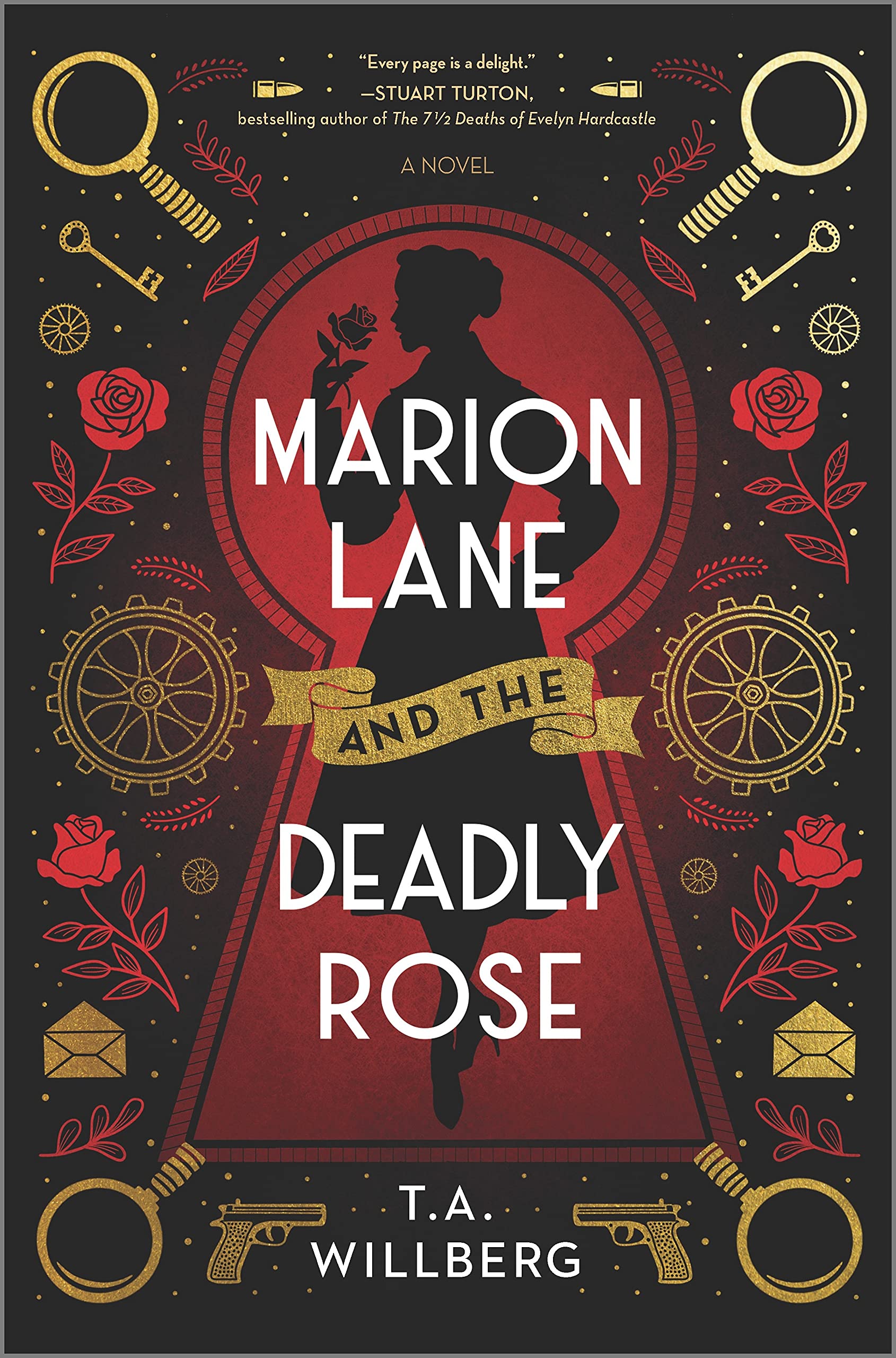 We’re sure you’re all desperate to know more about the gorgeous featured cover this week – you’re looking at T.A. Willberg‘s second book in the Marion Lane series, Marion Lane and the Deadly Rose (Orion / Trapeze). Our favourite quirky crime heroine is back in action with a brand new mystery to solve, coming in February 2022 in this incredible hardback jacket – remember you can pre-order right now!

I’m unbearably excited to reveal the smashing cover for MARION LANE AND THE DEADLY ROSE, book #2 in the ML series!

The exceptional cover for Black British Lives Matter (Faber & Faber), which Alexandra Wilson is contributing to, also launched today. This vital essay collection boasts a sensational line-up of Black professionals who have excelled in their fields, and will discuss the realities of what it means to be Black in contemporary Britain.

We are thrilled to announce the forthcoming publication of Black British Lives Matter, edited by @LennyHenry & @marcusryder https://t.co/9QrtHBihfN pic.twitter.com/F52BkOJs4M

And, we’re both thrilled and chilled by the cover reveal for Rebecca Netley’s The Whistling (Penguin Random House / Michael Joseph), a supremely scary gothic page-turner, following a bewildered governess who begins to suspect supernatural threats looming in her new charge’s home.

Just look at this cover reveal, which will undoubtedly bring a chill to the air:

This October, don't be afraid… Be terrified!

We are delighted to reveal the stunning cover for @Rebecca_Netley's #TheWhistling – a ghost story that will chill you to your very core!

The brilliant book releases just haven’t stopped, and we’d like to wish the happiest of publications to the following authors:

Matt Dunn‘s Pug Actually (HQ / HarperCollins) a rib-tickling romcom, told through the eyes of Doug the pug, who’s determined to find his owner the perfect match.

Kathryn Foxfield‘s It’s Behind You (Scholastic) a suspense-filled YA thriller about a reality TV show that soon turns sinister.

If you can, raise a glass to Mark Edwards today – we’ve just received the mammoth news that he’s surpassed 4 million readers across his Amazon catalogue – you read that right! We hope he’s celebrating well into the weekend with this fantastic achievement… In fact, that’s an order!

We can hardly believe that Ashley Audrain‘s genre-defining debut, The Push (Penguin Random House / Michael Joseph), has already been out in the world for half a year. But we can believe that this expertly woven upmarket suspense novel is still dominating the charts, all these months later – it is our absolute pleasure to announce that the book is in its 24th week on the The Toronto Star and The Globe and Mail bestseller lists, peaking at no. 5 on both this week! This is an extra-sweet bit of news for Ashley, who’s a Canada native! Unsurprisingly, the book was additionally listed in Goodreads’ top 48 books of the year, hand-selected by readers themselves, amongst some stellar company.

Speaking of charts, Emma Stonex‘s bestselling novel chronicling the deep-buried mysteries on the Cornwall coast, The Lamplighters (Picador / Macmillan), has swam back up the hardback fiction charts this week and is currently sitting pretty at no. 22.

We hope you all watched the CWA Awards! If you did, you’ll have noticed a host of our authors, who made several shortlists! A massive round of applause for:

C.L. Taylor, shortlisted for the Dagger in the Library, celebrating established crime writers with a vast library readership.

Ben Creed, shortlisted for both the John Creasey (New Blood) Award and the Gold Award – alongside giants such as Robert Galbraith and Chris Whittaker  – for their arresting Stalinist thriller, City of Ghosts (Welbeck).

Biba Pearce, shortlisted for the Debut Dagger Award for Rough Justice, which follows a grizzled ex-military man’s quest for the truth.

Bella Magazine readers will have seen Debbie Johnson‘s heart-stopping new romcom, The Moment I Met You (Hachette / Orion) featured as a must-read in their most recent edition – and who can blame them? We certainly can’t stop swooning over this story of a life-changing encounter between two strangers. We hope you caught Debbie in conversation with  fellow celebrated romance writer, Milly Johnson, where she talked all about this wonderful read; if you didn’t, you can watch back now!

Freya Sampson‘s bookish delight, The Last Chance Library (Bonnier Zaffre), is been winning some brilliant early trade press, including a starred Kirkus review, and a starred Library Journal review! Be sure to take a look at what they had to say about this endlessly charming story of a young woman’s fight to save her beloved local library.

Make sure you keep an eye out in the latest copy of Good Housekeeping, where you’ll find Sara Nisha Adams‘ The Reading List picked as a ‘Book of the Month’ in the category of ‘feelgood fiction’. This winning story of the bond forged between two lonely souls by a shared list of books was called a “joyful, uplifting read” and we couldn’t agree more! The features don’t stop there – it was also included as one of Nina Pottell’s picks for July in Prima Magazine!

Pug, Actually by Matt Dunn has just been released, and this loveable canine caper is starting strong, as one of Amazon’s selected romance reads for July, and it’s soared up their Hot New Releases chart in the ‘Rural Life Humour’ category, peaking at no.3. We’re keeping fingers, toes and paws crossed for the top spot!

Award-winning writer Jane Healey has received a brilliant early review this week for her gorgeously evocative upcoming book, The Ophelia Girls (Pan Macmillan / Mantle), which was celebrated in Booklist as the perfect title for “those seeking stories of female coming-of-age and how experiences of sexuality and death can shape teenage girls into the women they later become”.

Red Magazine has featured not one but two of our author’s titles in their round-up of the best July reads. The Reading List by Sara Nisha Adams got another nod, and Lex Croucher‘s raucous regency debut, Reputation (Bonnier Zaffre) was also touted as a “naughty historical romp” – no arguments here!

Some great news for two of our gifted historical fiction writers: Melanie Hudson‘s gorgeous wartime romance, The Night Train to Berlin (HarperCollins / One More Chapter) has made the top of the Amazon US charts in the ’20th Century Historical Fiction’ – as has Fiona Valpy‘s The Beekeeper’s Promise (Amazon Publishing / Lake Union), a richly moving love story set in 1940’s France.

Some great news for YA readers – Brianna Bourne‘s post-apocalyptic YA debut will very soon be published in the UK by Scholastic! To celebrate, not only did Brianna treat us to the UK cover reveal, she’s been embracing her inner book fairy by holding a 7-day giveaway of titles by her favourite YA authors – talk about spreading the love! There’s still time to get in on this, so be sure to keep an eye on her Twitter!

As if revealing the UK cover & release date wasn't enough excitement for one day, I'm popping back in to announce that I'm starting ✨ #YaMWeekofGiveaways ✨ tomorrow!! 7 days, 7 books up for grabs. First one's a BIG one! More info below 👇 pic.twitter.com/1YMWs7LLkO

All hail Benjamin Dean! We were so pleased to announce the brilliant news this week that Ben has signed a brand new YA deal with S&S Children’s, the first being The King is Dead, an unforgettable royal thriller which sees teen prince James, who is both Black and gay, primed to take the throne after the death of his father, in a reimagined contemporary Britain.

Maisie Chan‘s loveable Middle Grade comedy, Danny Chung does NOT do Maths (Bonnier Books / Piccadilly Press) is flying high, with loads of shout outs in trade and press – this week, it featured in The Guardian‘s round-up of best new children’s books, as well as earning a spot as a BookTrust Book of The Day!

We’re also thrilled to have closed on the following deals: