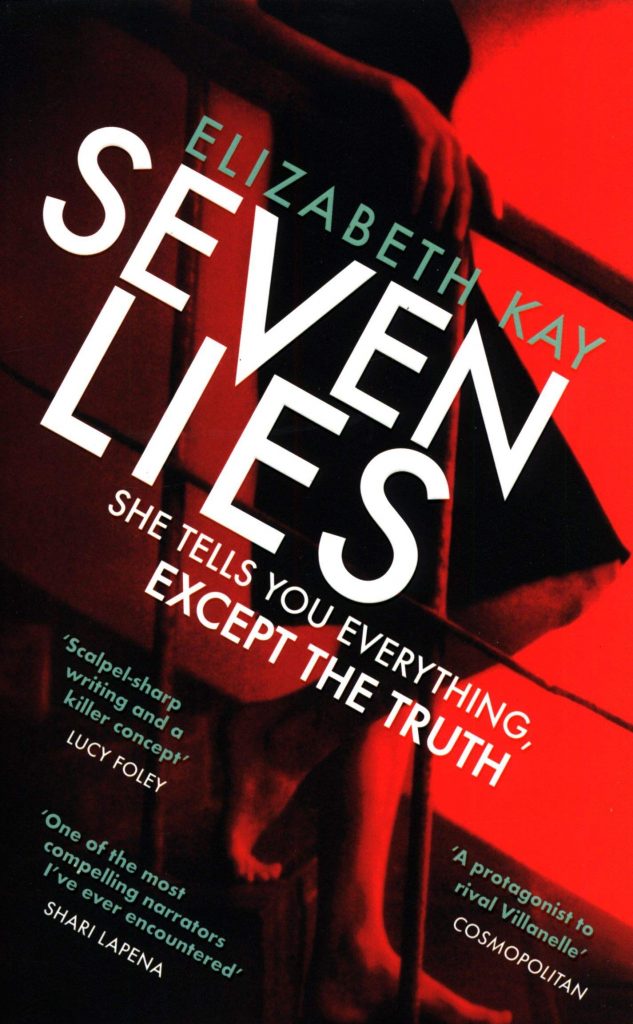 The amazing press for our authors keeps flooding in, from a feature in Vogue India, to an international award for foreign fiction, this week has been a whirlwind of exciting news!

We are thrilled for Elizabeth Kay, whose explosive thriller Seven Lies about toxic female friendship is now available in US paperback from Penguin Random House / Pam Dorman Books. This twisted tale follows best friends Jane and Marnie whose tight friendship is tested when Marnie falls in love with a man that Jane loathes. When Marnie asks if she likes him, Jane tells her first lie. After all, even best friends keep some things to themselves, but she can’t help but wonder if she had been honest, then perhaps her best friend’s husband might still be alive today… Read all about this exciting publication here!

I am your maid. I know so much about you. But when it comes down to it: what is it that you know about me?

We’re also excited to reveal this jaw-dropping cover for one of 2022s most anticipated debuts, The Maid by Nita Prose. The Maid (Harper Fiction/HarperCollins) has been creating significant buzz ahead of publication, having been optioned for film by Universal Pictures, with Florence Pugh attached to star. The book follows young hotel maid Molly, whose top priority is keeping everything pristine and tidy for both her guests and herself at the Regency Grand Hotel. However, Molly’s quiet and organised life is soon turned upside down when she discovers an infamous guest, Mr Black, very dead in his hotel room. This isn’t a mess that can be easily cleaned up, and so Molly becomes embroiled in a hunt for the truth, learning who to trust as she navigates the secret underbelly of the Regency Grand Hotel.

Who wants to meet some of the characters from THE LAST CHANCE LIBRARY?! A huge thanks to the team @BerkleyPub for bringing my gorgeous US cover to life. #thelastchancelibrary #thelastlibrary pic.twitter.com/O3707YDRlw

Check out this charming animated cover for Freya Sampson’s upcoming novel, The Last Chance Library (Berkley/Penguin Random House), which is set to be published by Berkley Books/Penguin Random House, this coming August and is already making waves as a must-read for summer, having been featured in Newsweek’s roundup of “21 Enticing Books to Take Along This Summer” and picked by Nekesa Afia as the top pick on her TBR list. The book was also recently featured in Publisher’s Weekly’s ‘Top 8 books set in bookstores’, where the reviewer comments “Who doesn’t have a soft spot (read weakness) for books set in small English villages… this book is basically catnip for those of us who watch British TV and drink too much tea.”

Clare Pooley, author of the New York Times bestselling novel and BBC Two Radio pick The Authenticity Project, has recently won the Prix Babelio Award for Foreign Fiction! Having been included on several lists as a ‘best book’ of 2020, (including Woman and Home’s, Real Simple and Library Journal) and translated into thirty different languages, Clare’s book has continued to draw in new readers all over the world.

The publication of Abigail Mann‘s heart-warming and hilarious new book, The Sister Surprise, is fast approaching, being set to publish on 23rd June 2021 with One More Chapter/HarperCollins. Abigail will be joined by fellow agency authors Helly Acton and Hannah Tovey for a Facebook LIVE event on 23rd June 7:30 (BST) in order to celebrate the paperback publication!

Oi oiiiiii! fancy joining me, @hellyacton, and @hannahctovey to celebrate #TheSisterSurprise coming out in paperback? 🗓️ Jot down 7:30pm Wednesday 23rd June! We'll be live on the @0neMoreChapter_ FB page to answer your questions and chat about our books. https://t.co/qJ5MryN6ss https://t.co/RbvsN6Prcw

Daisy Jones’ fantastic debut All The Things She Said: Everything I Know About Modern Lesbian and Bi Culture (Coronet/Hachette), is continuing to make the rounds on the must-read lists for 2021, having been featured in Cosmopolitan’s roundup of ‘42 of the best books by LGBTQ+ authors’ as well as Refinery29’s list of ‘8 Books To Bring A Bit More Queer Joy To Your Life’. Daisy has also picked out some of her own favourite reads to share for Foyle’s Pride Month, and an extract from her book was also recently featured in the Stylist, examining the crazy lesbian / depraved bisexual tropes in pop culture and how they became so embedded into how we consume queer narratives. Read the full excerpt here.

In some wonderful bestseller news, The Lamplighters (Picador/Pan Macmillan) by Emma Stonex is number 24 on the Sunday Times hardback fiction chart this week. Being a regular staple on the list since publication, we’re positively thrilled to see The Lamplighters continue to beam its way into the hands of new readers every week!

C.L Taylor also recently featured on the HarperCollins Facebook page, where she sat down with fellow thriller writers Charlotte Northridge, V.E. Adamson, and Phoebe Morgan to discuss her latest heart-stopping thriller and Sunday Times bestseller, Her Last Holiday  (Avon/HarperCollins). Described by Gillian McAllister as “A sensational novel, tense, nightmarish, peppered with deep, real characters and shocking twists” and ‘An addictive page-turner’’ by Lucy Clarke, it comes as no surprise that the book was also recently chosen by Kobo (a Canadian e-book seller) as part of their June Crime Campaign, running from 18th – 28th June.

Katherine Faulkner’s Greenwich Park ((Raven Books/Bloomsbury) has performed phenomenally well since publication and it’s now your chance to get your hands on a copy, as a Kindle Direct Deal will be taking place on 27th June!

Abbie Greaves‘ The Ends of the Earth (Century/Penguin Random House) was included as one of Culturefly‘s ‘Must-read Books of the Summer 2021’, where it was described as “a tale that’s all the more heart-warming because it feels so real and relatable.”

T.A. Willberg’s quirky crime debut, Marion Lane and the Midnight Murder (Trapeze/Orion) was recently featured in My Weekly’s roundup of ‘Best New Books’, where the reviewer praised it as ‘’a cosy crime and locked-room whodunnit, you’ll fall down the tunnels into a world of mystery.”

James Plunkett’s new book End State: 9 Ways Society is Broken and How We Can Fix It  (Trapeze/Penguin Random House), recently received a glowing endorsement from Senior Economics Commentator and Columnist at The Guaridan. Aditya Chakrabortty. He commented that “as well as working in digital technology, James has a background in both economics and welfare rights. In this book, he brings these different disciplines into a stimulating and  productive conversation. He is well aware of the dangers of the digital economy but also bracingly optimistic about how they might be tackled. A simple, well-crafted and useful contribution to a vital debate.”

Our YA and Middle Grade authors have also been gaining some much deserved attention, with Brianna Bourne’s YA debut, You and Me at the End of the World (Scholastic), being featured in Forbes list of ‘YA And MG Book Trends For Summer: Sequels, Superheroes And Sweethearts’. Having also been highlighted in summer round-ups by The New York Times, Pop Sugar and The Book Riot, You and Me is definitely one to watch out for this summer!

Jen Carney’s charming debut Middle Grade novel The Accidental Diary of B.U.G (Puffin/Penguin Random House) was included in a round-up by Penguin Random House on ‘14 of the best LGBTQIA+ books for kids’. From being listed as one of The Bookseller’s ‘Ones To Watch’ for January 2021 and Caboodles ’21 Children’s Books to Look Out For in 2021’, to being selected as part of the Love My Read children’s subscription box, B.U.G has received a whirlwind of amazing press since publication.

Ben Dean’s delightful Middle Grade book, Me, My Dad and the End of the Rainbow (Simon & Schuster Children’s) appeared in a feature by Vogue India on ‘Children’s books that will introduce them to important conversations around LGBTQIA+’. The reviewer praised the book as, “packed with heart and humour, this is an uplifting story about father-son relationships, acceptance, friendship, a positive look at having gay parents, and the history and spirit of Pride.’’

Me, My Dad and the End of the Rainbow just CASUALLY name-dropped in @VOGUEIndia 🌈✨

Yet another reason to pick up this beauty 😍

Our IRD team has been hard at work procuring some truly amazing deals this week:

The Danish rights for NINE of Ella Carey’s titles have been sold to Lindhardt og Ringhof!