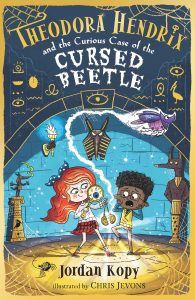 We’ve got some fright-tastic news in the lead up to Halloween! The second book in Jordan Kopy‘s Theodora Hendrix series is published today by Walker Books.

This Middle Grade comedy horror was was a hit with readers upon the launch of the first title, Theodora Hendrix and the Monstrous League of Monsters, last year; we met precocious young Theodora, a human girl raised a family of loving (but terrifying) monsters. Just last month, we received the monstrously great news that the book has been nominated for the Lancashire School Library Service Fantastic Book Awards!

And, after winning plenty of hearts in the UK, we were thrilled to announce earlier this year that Theodora is going stateside! Simon & Schuster Children’s USA snapped up the rights, and is set to release the first in the series in September 2023.

Aren’t you already obsessed with book two’s gorgeous shiny cover? We can for sure see it taking pride of place on any shelf!

Thrilled to share the cover of the 2nd Theodora Hendrix book, THEODORA HENDRIX AND THE CURIOUS CASE OF THE CURSED BEETLE, by the fab @Chris_Jev Isn’t it GORGEOUS?! Out 7 Oct, now on presale @ https://t.co/k9QtyzNChY#TheodoraHendrix #WritingCommunity @WalkerBooksUK @ChloeSeager pic.twitter.com/d1N04Qdpsn

Promising hilarious hijinks and creepy crawlies, this book will have you on the edge of your seat as Theodora faces off a dastardly spy, fights to protect her family, and stumbles upon an incredible magical discovery:

After facing down an evil hag, a thieving skele-crow and an army of the undead, ten-year-old Theodora Hendrix is certain she can handle anything – that is, until she meets the unpleasant Inspector Shelley and her even more unpleasant pet rat. Shelley and Ratsputin have come to spy on the MLM, and are determined to make trouble at every turn. Then Theodora makes a discovery of her own: a cursed beetle. She needs to destroy it without attracting the attention of the inspector – and fast. The stakes couldn’t be higher: if Theodora fails, her beloved monster family will rot in the dankest, darkest prisons of Transylvania…

Jordan works in the financial world and is a New Yorker now living in London with her husband and badly behaved cat. She spends her days staring at numbers and her nights with ghosts, witches and the occasional evil hag.

We’re sending all the positive, scary vibes to Jordan, as we celebrate another hilarious, spine-tingling read. Make sure you get your copies today!