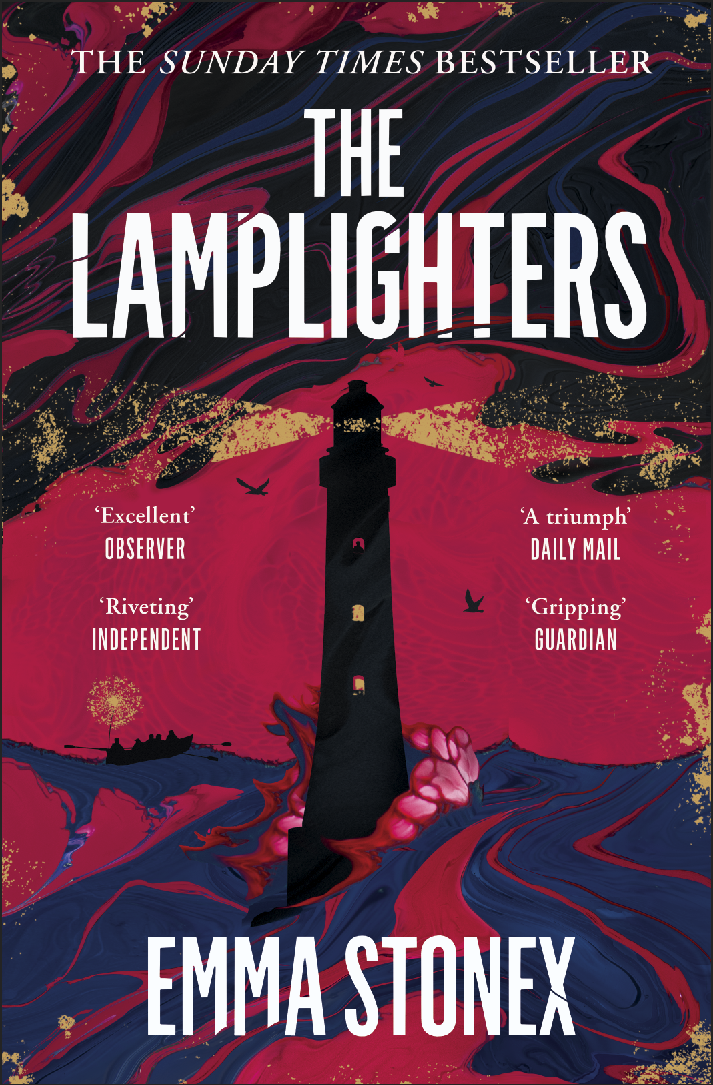 After publishing in US paperback earlier this month (Penguin Random House / Viking), we are overjoyed to announce that Emma Stonex‘s stunning novel The Lamplighters is finally published in UK paperback today (Macmillan / Picador). The Lamplighters, a beguiling tale of love and loss set on the rugged Cornish coast in the 1970s, is based on the true story of three lighthouse keepers who vanished in mysterious circumstances, and the women who loved them.

This completely compelling debut gripped readers when it first published in 2021, hitting the No.5 spot on The Sunday Times bestseller list just days after publication, and charting in the Top 40 for an astounding 17 weeks! It was selected as Apple’s Book of the Month (March 2021), and translation rights have been secured by a tremendous 25 territories.

Emma’s glorious debut has been featured in a deluge of roundups, including The Observer, The Telegraph, The Sunday Times, Good Housekeeping, iPaper, Stylist, and Fabulous, to name a few. The hype surrounding the paperback launch has been wonderful to see, as The Lamplighters was Guardian Audiobook of the week (March 2022), and Emma was interviewed on the Talking Scared podcast, where she talks about the sea, lonely buildings, and the inexhaustible metaphor of the lighthouse. Across the channel, the French audiobook of The Lamplighters (Les Gardiens du Phare) was longlisted for the Prix Audiolib 2022.

Take a look at the gorgeous paperback cover:

Reviews for The Lamplighters have been pouring in – read a small selection of them below:

‘The Lamplighters transported me effortlessly to the mysterious Maiden Rock and life on the Cornish coast. Stonex creates a most engaging collection of voices and perspectives over time that unveil what happened in true pager-turner fashion, a mystery told through vivid prose that had me completely absorbed from start to finish. Haunting, harrowing and heartbreaking, this is a novel that will most certainly stay with you.’ Ashley Audrain, Sunday Times bestselling author of The Push

‘An intoxicating and beautifully written mystery about love and loss, as moving as it is suspenseful.’ C. L. Taylor, author of The Missing

‘Beautifully written and evocative, this is a mystery, a love story and a ghost story, all at once. It kept me gripped throughout, and I didn’t want it to end. Wonderful.’ S J Watson, Sunday Times and New York Times bestselling author of Before I Go to Sleep

‘Hatred, distrust and lies and an unexpected sort of love binds these women in an elegant novel that is as interested in the notion of hope and acceptance as it is in murder and revenge.’ Guardian

‘Lyrical, poetical and intensely gripping. Emma Stonex captures the harsh beauty of the sea and the stark isolation of the tower in this compelling mystery, where sinister shadows cast intrigue over the lives of each of the three men who keep the light.’ Fiona Valpy

‘Stonex’s story has the mesmerism of a churned winter sea.’ The Sunday Times

‘Remarkable . . . Every page resonates with the dark, powerful presence of the sea.’ Raynor Winn, Sunday Times bestselling author of The Salt Path

Cornwall, 1972. Three keepers vanish from a remote lighthouse, miles from the shore. The entrance door is locked from the inside. The clocks have stopped. The Principal Keeper’s weather log describes a mighty storm, but the skies have been clear all week.

What happened to those three men, out on the tower? The heavy sea whispers their names. The tide shifts beneath the swell, drowning ghosts. Can their secrets ever be recovered from the waves?

Twenty years later, the women they left behind are still struggling to move on. Helen, Jenny and Michelle should have been united by the tragedy, but instead it drove them apart. And then a writer approaches them. He wants to give them a chance to tell their side of the story. But only in confronting their darkest fears can the truth begin to surface . . .

Congratulations on this exciting day, Emma! UK readers, don’t miss out! Get your copies here.