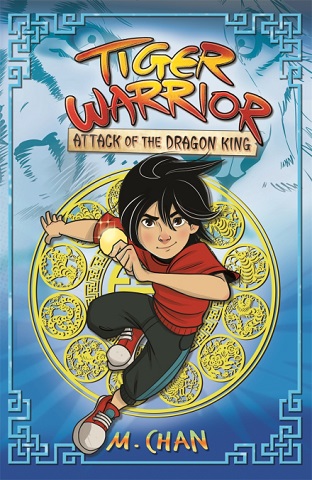 In the mood for your next adventure? Maisie Chan‘s action-packed new series, Tiger Warrior, hits shelves today! Published by Hachette Children’s Books, the first stop in this mystical Middle Grade series is Attack of the Dragon King.

In this perfect read for all the eager young warriors in your life, follow young Jack as he learns to harness ancient powers to fight the forces that seek to destroy him.

Heart of a tiger, strength of a dragon, body of a … schoolboy? A thrilling new action-adventure series with the magical power of the Chinese Zodiac.

When Jack’s grandpa leaves him a magical twelve-sided jade coin, Jack finds himself caught in an ancient battle between good and evil. For he is the new Tiger Warrior, and it’s up to him to save the world!

Maisie is still flying high from her widely celebrated recent release, Danny Chung Does NOT Do Maths (Bonnier Books / Piccadilly Press), a big-hearted family comedy that’s already winning hearts, we’re sure this stellar new series will see the same success! Be sure to catch Maisie’s appearance on Moon Lane TV in celebration of release day!

We want to wish a massive congratulations to Maisie on another fantastic new book – here’s to many more!