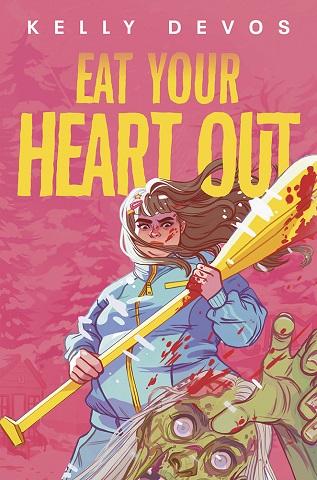 Did somebody say ‘Zom Com’?? We are pleased as punch that Kelly deVos‘ high-energy zombie satire, Eat Your Heart Out, is released today by Penguin Random House / Razorbill!

We can’t think of a better summer read to dive into than this subversive joy ride – the book follows seventeen-year-old Vivian, reeling after being shipped away to fat camp, who must quickly find her wits (and a weapon) when it becomes overrun with the undead…

Vivian Ellenshaw is fat, but she knows she doesn’t need to lose weight, so she’s none too happy to find herself forced into a weight-loss camp’s van with her ex-best friend, Allie, a meathead jock who can barely drive, and the camp owner’s snobby son. And when they arrive at Camp Featherlite at the start of the worst blizzard in the history of Flagstaff, Arizona, it’s clear that something isn’t right.

Vee barely has a chance to meet the other members of her pod, all who seem as unhappy to be at Featherlite as she does, when a camper goes missing down by the lake. Then she spots something horrifying outside in the snow. Something…that isn’t human. Plus, the camp’s supposed “miracle cure” for obesity just seems fishy, and Vee and her fellow campers know they don’t need to be cured. Of anything.

Even worse, it’s not long before Camp Featherlite’s luxurious bungalows are totally overrun with zombies. What starts out as a mission to unravel the camp’s secrets turns into a desperate fight for survival–and not all of the Featherlite campers will make it out alive.

A satirical blend of horror, body positivity, and humor, Kelly deVos’s witty, biting novel proves that everyone deserves to feel validated, and taking down the evil enterprise determined to dehumanize you is a good place to start.

The book’s hilarity, feminist core, and searing critique of diet culture has won a host of attention and features in round-ups for Pop Sugar, Frolic and Bitch Media, amongst other platforms. Praise from fellow authors, as well as lucky early readers, has also been piling up for this smart, satirical read:

“Eat Your Heart Out is the zombie book you’ve been waiting for. Equal parts hilarity, mayhem, heartbreak, and biting wit, and filled with memorable characters to root for, this book is the perfect summer read.” — Kathleen Glasgow, New York Times bestselling author of Girl in Pieces

“deVos superbly blends humor and horror in this sharp-witted, high-stakes adventure that unpicks genre conventions and wades fearlessly into the dialogue surrounding fatphobia. A gory, no-holds-barred zombie story that manages to both celebrate and terrify.” – Booklist, starred review

“Meet your new favorite zombie story: Eat Your Heart Out is packed with nonstop thrills and chills, and a kickass leading lady you’d gladly follow into battle against the undead.” – Sarah Glenn Marsh, author of the Reign of the Fallen series

“A fast and funny satire that flips society’s obsession with thinness on its head and makes much needed space for a group of physically diverse teens to become heroes.” Goodreads reviewer, 5 stars

“THIS WAS SO MUCH FUN! If I could give it more stars I would! I cannot recommend this enough, and the cover? I stan!” Goodreads reviewer, 5 stars

Kelly deVos is from Gilbert, Arizona, where she lives with her high school sweetheart husband, amazing teen daughter and superhero dog, Cocoa. She holds a B.A. in Creative Writing from Arizona State University. When not reading or writing, Kelly can typically be found with a mocha in hand, bingeing the latest TV shows and adding to her ever-growing sticker collection.

Kelly’s work has been featured in the New York Times as well as on Vulture, Salon, Bustle and SheKnows. Her debut novel, Fat Girl on a Plane, named one of the “50 Best Summer Reads of All Time” by Reader’s Digest magazine, is available now.

This book is a guaranteed good time, and we can’t wait for readers everywhere to fall in love with its razor-sharp wit and important message. Congratulations to you, Kelly!