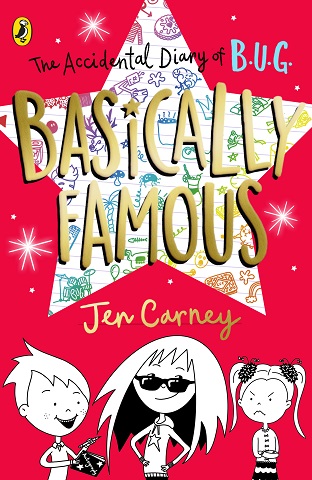 We’ve got yet another fantastic release for all you Middle Grade lovers! This time, it’s none other than superstar comedy author, Jen Carney, with the second instalment in the B.U.G. series, The Accidental Diary of B.U.G.: Basically Famous (Penguin Random House / Puffin)!

We’re bouncing off the walls that the wait is over for Jen Carney’s latest title – which happens to have the glitziest of covers! Basically Famous follows the enormous success of Jen’s debut, The Accidental Diary of B.U.G, which has been a hit with readers young and old since its release earlier this year. Praised in The Bookseller for her “whip smart observations” and “sparky” protagonist, Jen is the is the fresh, funny and inclusive new voice that readers have been waiting for.

And she’s been getting up to tons of fun in the lead-up to the book’s release! You can find Jen lending her dulcet tones to Puffin’s wildly popular Mission Imagination Podcast, and read her piece for BookTrust on the importance of funny, relatable books with incidental LGBTQ+ inclusion. And if you happen to be from Jen’s hometown in Chorley, be sure to stop by the Ebb and Flo Bookshop today, where she’ll be signing books and handing out goodies – she’s seemingly drowning in super cool, B.U.G themed badges, so get involved:

I have cool badges and I'm prepared to use them 😁 (to entice people to buy Basically Famous)! pic.twitter.com/9rVMcRzRsS

We know you can’t wait to read what’s in store for our favourite heroine – in the latest story, Billie Upton Green is determined to be discovered, and make her debut on the small screen:

School just got INTERESTING. Not only is Billie’s class learning how to P.E.E. in the classroom (don’t ask), they now have some very important contacts in the TV world.

So as long as Janey McVey doesn’t keep doing the splits for attention, and Billie’s mums don’t keep distracting her with a huge secret thing they seem to be planning… well watch out, because it’s time for B.U.G. to make it BIG!

Jen Carney is an over-imaginative, slightly rude ten-year-old girl stuck in a forty-year-old’s body. She writes contemporary laugh-out-loud middle grade fiction that celebrates diversity and modern families. Although packed with silly nonsense and daft drawings, her books tell important stories with family and friendships at their heart. Jen lives in Lancashire with her wife, three children and an array of animals. When not reading, writing or drawing, Jen enjoys eating peanut butter, dragging her family out for forced enjoyment of fresh air, and slinking off to the bathroom for a minute’s peace. The Accidental Diary of B.U.G is her debut novel.

We’re basically obsessed with Basically Famous, and we know readers will be, too – congratulations, Jen, on another fabulous release!