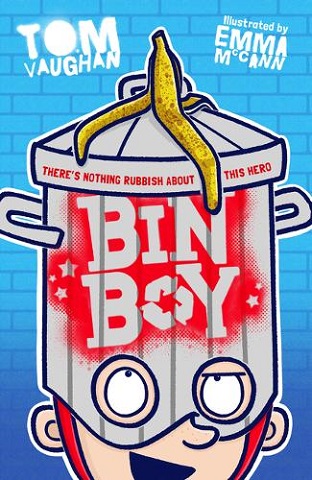 There’s a new superhero in town! We are pleased to announce that Tom Vaughan‘s rib-tickling Middle Grade comedy debut, Bin Boy, is released today by Scholastic.

Get ready to laugh out loud at this hilarious title from a bright new voice in the Middle Grade space. Meet Billy – the accidental superhero who finds himself in way over his head as he races against time to rid the world (but especially his house) of evil!

Many children think their step-parents are super-villains . . . but what if they really were?

10-year-old Billy’s mum has just re-married, and his new step-dad Phil is smarmy and try-hard . . . Even if he is super rich. On top of that, Billy – and his best-friend Viv – are so unpopular at school, only the IT Club rank below them in the school food-chain. And, the school bully keeps throwing bins at Billy’s head.

So, when Billy discovers his step-dad is a super-villain with an evil plan to destroy the entire world, it is the perfect excuse to break Phil and his mum up. But gathering evidence about a super-villain is harder than it looks, and when Billy accidentally becomes ‘Bin Boy’ – a superhero sensation – things become a whole lot more complicated.

Suddenly the fate of the global population is on Bin Boy’s shoulders. Can he save his family and the entire world?!

We just know readers everywhere will have a fantastic time with this one. Tom is a pro at writing hilarious hijinks, so it was only natural that he headed up a funny writing workshop as part of Scholastic’s Summer Reading Festival, a series of free events for schoolchildren:

Scholastic have just announced a Summer Reading Festival – a week of free events for schools! Best of all, we're kicking things off with a laugh-out-loud event…

Join us for the shortlist reveal and a funny writing workshop with author @tvaughan88: https://t.co/ugnYEk2glx pic.twitter.com/EFZeHXG3K5

Tom Vaughan is a journalist, television producer, author and all-round good guy. Despite modest success in those four fields, he’d most like to be remembered as the man who unsuccessfully tried to invent a meal between supper and breakfast, called supfast. He lives in London with his wife and two small unemployed people, also known as his children.

We’re sending Tom a massive congratulations, on the first of many super books!