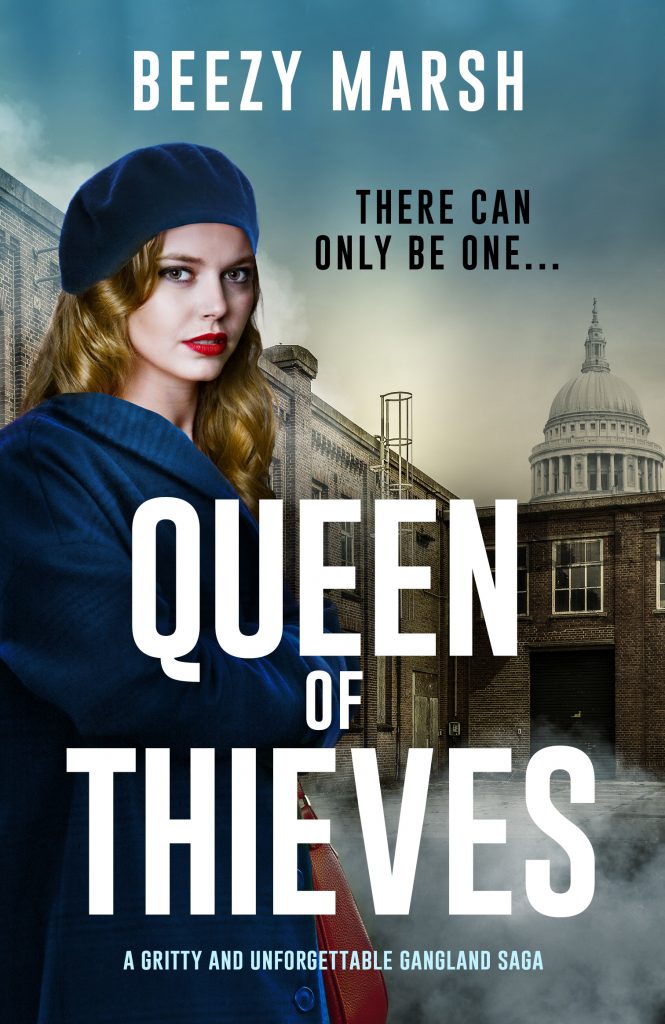 Allow us to introduce you to the Queen of Thieves, the first book in the epic gangland crime saga The Forty Thieves trilogy!

There’s been a lot of excitement in the run-up to this publication. Beezy Marsh has been interviewed on BBC Oxford, had a piece in The Daily Mail and also appeared on GB News, talking about the London girl gang who inspired the series.

Based on true events and people, Queen of Thieves is set in post-war London, featuring an all-female gang of shoplifters, or ‘hoisters’, called the Forty Thieves. If Call the Midwife took a wrong turn down a dark alley in Waterloo, or Mr Selfridge were to look closely at who was pilfering his stock, he’d find the Forty Thieves.

Alice Diamond, the Queen of the Forty Thieves, rules over her gang of hoisters with a bejewelled fist. Nell is a slum girl from Waterloo, hiding a secret pregnancy and facing a desperately uncertain future.

Sensing an opportunity to exploit Nell’s vulnerabilities, Alice takes her under her wing and, before long, Nell is experiencing the secret world of hoisting, with all the dangers – and glamorous trappings – that comes with this underworld existence.

Alice has a longstanding feud with Billy Sullivan’s all-male gang in Soho, and thinks Nell could be a useful weapon in her vendetta. But Nell has a secret agenda of her own, and is not to be underestimated. And the more she is exploited by both Alice and Billy, the more her hunger for revenge grows. As she embraces the seedy underbelly of London, will she prevail in carving out her own path to power and riches…

…and crown herself the Queen of Thieves?

Congratulations Beezy, we can’t wait for everyone to get hooked on The Forty Thieves! If you don’t already have a copy you can order yours here.