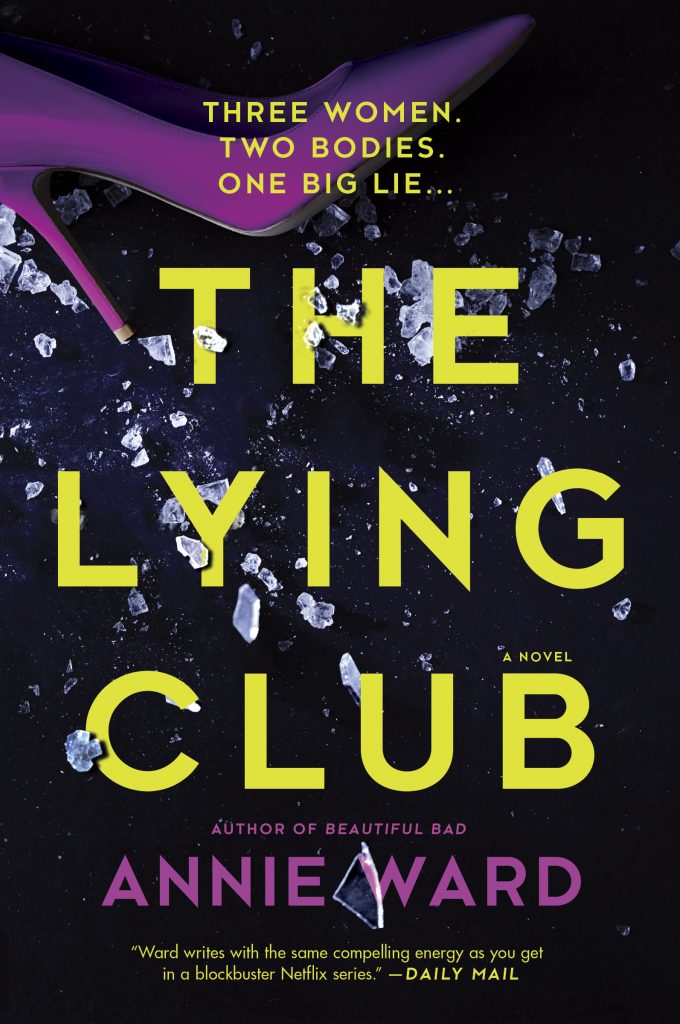 We are beyond excited to announce that The Lying Club, the riveting second novel by Annie Ward, author of Beautiful Bad, publishes in UK hardback today (Hachette / Quercus). Set in a glamorous world that masks a tangled web of lies, The Lying Club draws together three women in an explosive thriller of revenge, murder and shocking secrets.

Beautiful Bad published in 2019 to critical acclaim and was nominated for Best Debut Novel by the 11th Annual Strand Magazine Critics Awards. The Lying Club, Annie’s page-turning latest release, was featured in Inside Soap’s Hot List (March 2022) and Cosmopolitan’s ‘Best New Book Releases’, where it was described as a ‘juicy revenge thriller’. Annie also wrote a brilliant guest blog post for SHOTS Crime Blog, in which she talks about her creative process and the concept of ‘writing what you know’ – if you haven’t read it yet, you can access it here!

The lead-up to publication has been thrilling, and early reviews of The Lying Club have been nothing but positive:

‘Annie Ward has done it again! The Lying Club is a stunning whodunnit that will keep readers captivated until its final page. Ward has created characters so real you’ll feel like you’re a member of their dark and twisted world where everyone is a suspect, and everyone has a motive. The Lying Club is an edgy, addictive read about the lengths people go to in the name of love, no matter the consequences. Fans of Big Little Lies will revel in this dark, pacy page-turner.’ Heather Gudenkauf, NYT bestselling author of The Weight of Silence

‘Layers of deceit and intrigue explosively unravel at an elite private school in this dark and compelling must-read. A master of misdirection, Ward takes the reader on a continual roller coaster ride with one shocking twist after another.’ Liv Constantine, internationally bestselling author of The Stranger in the Mirror

‘Annie Ward ratchets up the tension in this tantalizing story of jealousy, privilege, lies and murder. With breakneck pacing and one shocking revelation after the next, The Lying Club will absolutely wow readers of domestic suspense.’ Mary Kubica, New York Times bestselling author of Local Woman Missing

‘If you loved Big Little Lies & Little Fires Everywhere, allow me to introduce you to your next obsession. Wildly addictive, smart, and chilling, The Lying Club by Annie Ward will have you on the edge of your seat, guessing until the very last page.’ Kim Liggett, New York Times bestselling author of The Grace Year

‘The Lying Club is another dark, twisty and expertly-plotted thriller by Annie Ward. Tension and intrigue bubble beneath the surface in the unique setting. I could barely turn the pages fast enough, eager to unravel the clever and brilliantly-written mystery.’ Karen Hamilton, International bestselling author of The Perfect Girlfriend

We can’t wait to welcome you to Falcon Academy…

At an elite private school nestled in the Colorado mountains, a tangled web of lies draws together three vastly different women. Natalie, a young office assistant, dreams of having a life like the school moms she deals with every day. Women like Brooke-a gorgeous heiress, ferociously loving mother and serial cheater-and Asha, an overachieving and overprotective mom who suspects her husband of having an affair.

Their fates are bound by their relationships with the handsome, charming assistant athletic director Nicholas, who Natalie loves, Brooke wants and Asha needs. But when two bodies are carried out of the school early one morning, it seems the jealousy between mothers and daughters, rival lovers and the haves and have-nots has shattered the surface of this isolated, affluent town-a town where people will stop at nothing to get what they want.

Set in a world of vast ranches, chalet-style apartments and mountain mansions, The Lying Club is a juicy thriller of revenge, murder and a shocking conspiracy-one in which the victims aren’t who you might think.