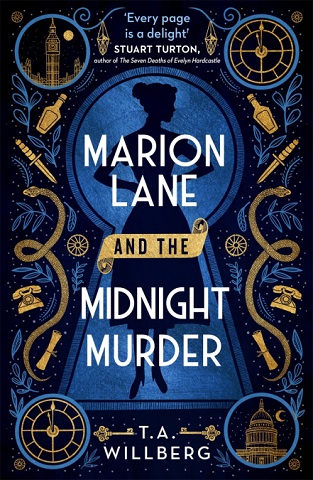 This week, we celebrate author radio appearances, becoming No.1 bestsellers and some stunning new publications.

Kicking off with a cover reveal, we’re proud to unveil the decadent US/Canadian cover for the paperback edition of T.A. Willberg’s Marion Lane and the Midnight Murder (HarperCollins / Park Row Books)

REVEAL! Behold the U.S./Canadian cover for the paperback of #marionlaneandthemidnightmurder 📣 On sale 4 Jan, 2022 and includes exclusive bonus material!

We’re buzzing that The Accidental Diary of B.U.G: Basically Famous (Penguin Random House / Puffin) was released this week! Superstar Middle Grade writer, Jen Carney, is back at it again with another rib-tickling read following the (mis)adventures of Billie Upton Green, which is definitely one to add to the TBR.

Beezy Marsh was interviewed by Robert Elms on BBC Radio London this week, as the countdown continues towards the publication of her gripping gangland novel, Queen of Thieves (Hachette / Orion Dash). You can have a listen (2 hours and 10 minutes in) here to learn more about the formidable and ferocious girl gang that inspired Beezy’s book.

Check me out I sold a few books and am not universally hated. pic.twitter.com/vci4QQp77y

And if you’re brave enough to read, Kathryn was also featured in Ginger Nuts of Horror, where she wrote about the book that made her: Slugs by Shaun Hutson.

The Long, Long Afternoon (Bonnier / Manilla Press) by Inga Vesper was published in paperback this week, with this atmospheric cover. Make sure you catch Inga’s gorgeously-written and pacey thriller debut set in 1950’s California if you haven’t already devoured it!

Sara Nisha Adams’ novel about connection and the immense power of books, The Reading List (HarperCollins / HarperFiction), has been featured in People Magazine’s picks of The Best New Books. Sara was also interviewed this week by Shondaland, whose final verdict was that Sara’s debut is ‘a surprising delight of a novel’.

Katherine Slee’s heart-warming and heart-wrenching, The Love We Left Behind (Amazon Publishing), has hit No.7 in the Bookstat e-Book Chart and was also recommended by Woman’s Own BookClub, who described it as “full of emotion”.

The Boy Who Made Everyone Laugh (Scholastic) by Helen Rutter is Book of the Week in The Week Junior, who declared that, “this fast-paced story will have you laughing out loud.”

And we finish this week on some fantastic IRD deals: