The Girl From Paris by Ella Carey published by Bookouture 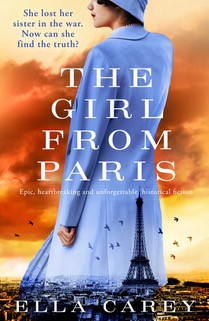 The latest novel by international bestseller Ella Carey has been published by Bookouture, and readers old and new are going to love the third book in Carey’s popular Daughters of New York series.

The Girl From Paris features a young Vianne, who we first encountered in A New York Secret. It starts in 1918, in a Paris reeling from the Great War, before transporting the reader to New York, and immersing them in the fashion and sounds of that great city as it emerges in the 1920s. With Carey’s unmistakable brand of drama, romance and glamour, it is little wonder that this novel has already climbed to the top of Amazon bestseller lists in the UK, US and in Carey’s home country of Australia too.

So thrilled that The Girl from Paris has gone into the top 100 in Australia on the very first day of publication here! Thank you Australian readers xx Thank you Bookouture 🙏🥳💕 ⁦@bookouture⁩ ⁦@MMLitAgency⁩ https://t.co/vVQi71tyKd

Vianne rushes through the crowded streets of Paris as the German bombs begin to fall. As she rounds the corner she sees the familiar spires of the old church burst into flames. Too late, she realizes that her mother and sister are trapped inside….

With nothing left for her in Paris but sad memories, she decides to sail for New York. Determined not to look back, she throws herself into her new life – spending her days sewing dresses for wealthy Upper East Side women and her evenings dancing the Charleston to Duke Ellington in the new downtown clubs. When Vianne meets handsome Italian Giorgio Conti, he encourages her career, and she feels safe for the first time since she lost her family.

Will Vianne find the courage to follow her heart and return to New York and her life with Giorgio? Or will duty bind her to the family she had left behind and force her to remain in France?

Readers are totally captivated by The Girl from Paris:

‘I recommend curling up with the book and enjoying the storytelling just as I did.’ Karen K is Reading

‘Once again, Ella has produced an emotional and gripping historical drama that proves her talent.’ Ceri’s Little Blog

‘This book has a beautiful message and is a must read for those who have a thing for the 1920’s, fashion, romance and family dramas.’ The French Village Diaries

‘Thank you Ella Carey for such an amazing addition to the Daughters of New York series.  This is one series I didn’t want to end.’ Page-Turners