Maisie Chan’s winning family comedy, Danny Chung Sums It Up, launches in the US today 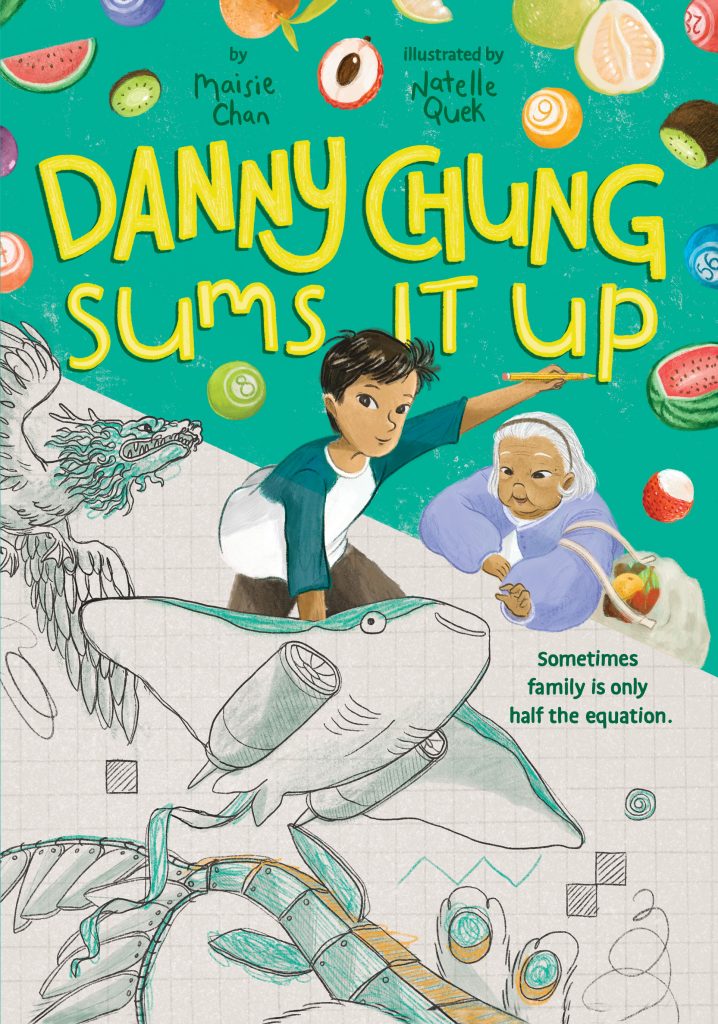 Fabulous news for you lovers of funny books! Maisie Chan’s Danny Chung Sums It Up is being released in the US today with Abrams!

This launch is hot on the heels of the UK release earlier this year, by Bonnier Books / Piccadilly Press, which published under the name Danny Chung Does Not Do Maths. In June, Danny Chung topped the Amazon UK new releases in ‘Exploring Asia For Children’, and American readers have been eagerly awaiting the stateside launch since. The book was included Summer ’21 issue of Baker & Taylor’s Diversity & Inclusion catalog, and you can catch Maisie in a panel event hosted by Books of Wonder New York, along with her US illustrator Natelle Quek, chatting all abut the book!

And we just love the look of the revamped US jacket, in all its hardback glory:

Danny and his Nai Nai’s relationship blossoms in this tale of growing up, the power of family and the joy of learning about your heritage…

Eleven-year-old Danny Chung loves drawing more than anything – certainly more than maths, which, according to his dad and everyone else, is what he is ‘supposed’ to be good at. He also loves having his own room where he can draw in peace, so his life is turned upside down when a surprise that he’s been promised turns out to be his little, wrinkly, ex-maths-champion grandmother from China. What’s worse, Nai Nai has to share his room, AND she takes the top bunk!

Nai Nai can’t speak a word of English, which doesn’t make things easy for Danny when he is charged with looking after her during his school holidays. Babysitting Nai Nai is NOT what he wants to be doing!

Before long though it becomes clear to Danny that there is more to Nai Nai than meets the eye, and that they have more in common that he thought possible …

Have a look at what happy readers have had to say about this joyful family comedy:

“The intergenerational relationship between grandmother and grandson shows the power of love to connect across ages, cultures, and language barriers, as Danny doesn’t speak Nai Nai’s dialect. Told with humor and authenticity, this refreshingly sweet story also touches on the challenges Danny and his family face as British Chinese people. Funny and heartwarming; a balanced equation of family, culture, and being true to yourself”  Kirkus

“Danny Chung Does Not Do Maths is both heartwarming and hilarious, filled with characters you’ll instantly love.” Jamie Smart, author and illustrator of Bunny Vs Monkey

“Danny Chung Does Not Do Maths is wonderful! Full of heart and humour, and it brilliantly highlights the importance of being true to yourself” Katie Tsang, bestselling author of the Sam Wu and Dragon Realm series

Maisie Chan is a children’s author from Birmingham. She has written early readers (Hachette) and had short stories published in various books such as Ladybird Tales of Superheroes (Penguin) and Stories From Around the World (Scholastic). In 2018, she started the Bubble Tea Writers to support and encourage new British East Asian writers in the UK.

She enjoys writing cross-cultural tales that often feature generational misunderstandings; this is partly due to her background as a transracial adoptee and her experience caring for her elderly parents. She has a Masters in American Film and Literature and has an interest in race and representation.

She currently lives in Glasgow and is on the Writers Advisory Board for Literature Alliance Scotland.

We’re so pleased that Maisie’s Middle Grade magic is crossing the pond and finding a home with a whole new audience – we predict massive success!