One of 2022’s most hotly anticipated novels is finally here: The Maid is published in the US and Canada today 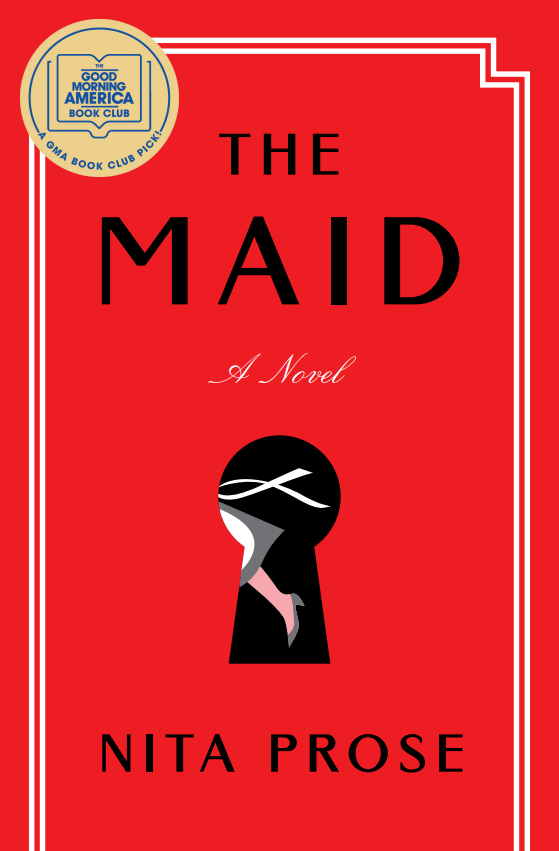 After months and months, the wait is finally over. We are beyond thrilled to share that this year’s most highly-anticipated debut, The Maid by Nita Prose, is now available in the US and Canada in hardback (Penguin Random House). The UK edition will follow soon after on 20th January.

This genre-bending, Agatha-Christie-esque mystery with a lovable protagonist at its heart has taken the world by storm. US rights in The Maid were first snapped up by Hilary Teeman at Ballantine / Penguin Random House in a highly-competitive auction, and Canadian rights were quickly acquired by Nicole Winstanley at Penguin Random House. Charlotte Brabbin at HarperFiction / HarperCollins triumphed in a heated six-way auction for UK & Commonwealth rights. Translation rights were then sold into a whopping 29 different territories, and Universal optioned its film rights, with Academy Award nominated actress Florence Pugh attached to star as the leading lady. If you are interested in finding out more about this dizzying journey, you’ll love reading this article, featuring Nita in an interview with Quill & Quire, discussing everything from her inspiration behind the book to the international splash it has since made.

There has been a huge amount of excitement in the run-up to publication with endorsements from the New York Times, Toronto Star and a starred review in Booklist, to name but a few! We are also over the moon to share that The Maid has been chosen as a Good Morning America Book Club Pick, which is a staggering testament to the brilliance of Prose’s debut. It was also as Cityline’s January Book Club pick in Canada, and Random House’s Book Club Spotlight Pick in January. Nita herself was chosen as one of Toronto Life’s ‘Top 50 Most Influential Torontonians‘, and you can catch her discussing The Maid live with the Toronto Public Library on 14th January here. The Maid has also been included in a number of 2022 roundups. such as Library Journal’s ‘Best Debut Novels in 2022‘ and Buzzfeed’s feature on ‘The Books That Booktok is Highly Anticipating in 2022‘, to name just a few. There has been unprecedented buzz online about this book, and the cover was recently revealed with this bold, brilliant trailer:

Early reviewers and readers for The Maid have been completely captivated by this cosy, charming whodunnit:

‘An endearing debut…. Prose threads a steady needle with the intricate plotting, the locked-room elements of the mystery and especially Molly’s character. The reader comes to understand Molly’s worldview, and to sympathize with her longing to be accepted—a quest that gives The Maid real emotional heft.’

‘Captivating, charming, and heart-warming, with deft writing and a clever, original plot, this unusual crime novel will leave readers with a warm glow.’

‘An eccentric and unforgettable sleuth who captivated me and kept me furiously turning the pages.’ —Sarah Pearse, New York Times bestselling author of The Sanatorium

‘The Maid is a masterful, charming mystery that will touch your heart in ways you could never expect. The endearing, unforgettable Molly reminds us to challenge our assumptions about one another, and shows us how meaningful it is to feel truly seen in the world.’—Ashley Audrain, New York Times bestselling author of The Push

‘A charming, clever, and wholly original whodunit. I cheered and felt deeply for Molly the Maid—a complex and masterfully drawn protagonist I won’t soon forget.’—Andrea Bartz, New York Times bestselling author of We Were Never Here

‘A heroine as loveable and quirky as Eleanor Oliphant, caught up in a crime worthy of Agatha Christie. Loved it!’—Clare Pooley, New York Times bestselling author of The Authenticity Project

‘It’s impossible not to love Molly, an endearing, eccentric hotel maid. . . . As in any cozy whodunit, clean appearances may in fact hide a few smudges. The twists and surprises keep coming until the very last page of this delightfully fresh debut.’—Sarah Penner, New York Times bestselling author of The Lost Apothecary

So, without further ado, we welcome you to the Regency Grand Hotel, where you will find Molly the Maid…

Molly Gray is not like everyone else. She struggles with social skills and misreads the intentions of others. Her gran used to interpret the world for her, codifying it into simple rules that Molly could live by.

Since Gran died a few months ago, twenty-five-year-old Molly has been navigating life’s complexities all by herself. No matter—she throws herself with gusto into her work as a hotel maid. Her unique character, along with her obsessive love of cleaning and proper etiquette, make her an ideal fit for the job. She delights in donning her crisp uniform each morning, stocking her cart with miniature soaps and bottles, and returning guest rooms at the Regency Grand Hotel to a state of perfection.

But Molly’s orderly life is upended the day she enters the suite of the infamous and wealthy Charles Black, only to find it in a state of disarray and Mr. Black himself dead in his bed. Before she knows what’s happening, Molly’s unusual demeanor has the police targeting her as their lead suspect. She quickly finds herself caught in a web of deception, one she has no idea how to untangle. Fortunately for Molly, friends she never knew she had unite with her in a search for clues to what really happened to Mr. Black—but will they be able to find the real killer before it’s too late?

A Clue-like, locked-room mystery and a heartwarming journey of the spirit, The Maid explores what it means to be the same as everyone else and yet entirely different—and reveals that all mysteries can be solved through connection to the human heart.

Congratulations on this very special day, Nita. And if you have not yet ordered a copy yet, you can do so here!