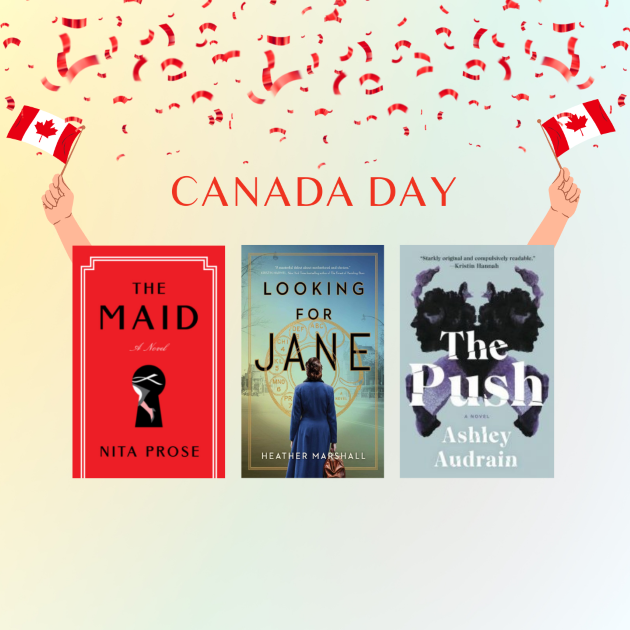 Today is Canada Day, a holiday which celebrates and acknowledges the anniversary of Canadian Confederation, and a day where Canadians across the country and around the world celebrate their history, culture, and achievements. We have so much to celebrate here at the MM Agency given the spellbinding success of our own Canadian authors, many of whom have topped the Canadian charts, and achieved global success.

Heather Marshall is the incredibly talented debut author of the #1 Canadian Bestseller, Looking For Jane. It follows the Jane Network, a real-life underground abortion network that ran throughout North America in the 60s, before the treatment was legalized, and its effect on three generations of women. As the terrifying recent ruling on abortion rights in the US has dominated headlines, Looking For Jane has quickly become a timely novel to capture readers’ hearts, and spent a whopping 15 weeks on the Canadian bestseller charts. Look out for the UK paperback edition, publishing this August.

Ashley lives in Toronto with her partner and two young children. Before becoming a published author, Ashley worked as Publicity Director of Penguin Books Canada. Her first novel, The Push, is a page-turning psychological drama that explores the dark side of motherhood. It first published in 2020 to global acclaim, and Ashley’s second novel, The Whispers, is set to publish next year.

Nita is Vice President/Editorial Director at Simon & Schuster Canada, and lives in Toronto. The Maid, Nita’s debut novel, is a charming, escapist locked-room whodunnit which follows Molly the Maid as an unlikely heroine who must track down a killer at the Regency Grand Hotel. It published in 2022 and quickly became an international sensation. Nita is currently working on her second novel.

Alongside our incredible Canadian authors, two of our UK authors have also achieved huge success over in Canada this year:

Greenwich Park is Katherine Faulkner’s masterfully twisty debut that presents a dark, compelling look at motherhood, friendships, privilege, and the secrets we keep. It published in North America in January 2022 and leapt instantly onto the Canadian bestseller list, reaching the hugely impressive No.6 position in The Globe and Mail fiction chart, and No.9 in the Toronto Star original fiction chart.

Local Gone Missing by Fiona Barton is a brilliantly tense and captivating mystery that follows Detective Elise King’s investigation into a local man’s disappearance in a seaside town where the locals and weekenders are at odds with each other. It published in North America on June 14th and jumped straight into the Canadian charts, reaching No.6 in The Globe and Mail hardcover fiction chart and No.9 in the Toronto Star original fiction chart. Local Gone Missing is also currently sitting at No.2 in the Toronto Star’s Mystery category.

We couldn’t be more proud of these phenomenal authors, but we feel especially proud of them on Canada Day! If you haven’t read these amazing books yet, this is your cue…