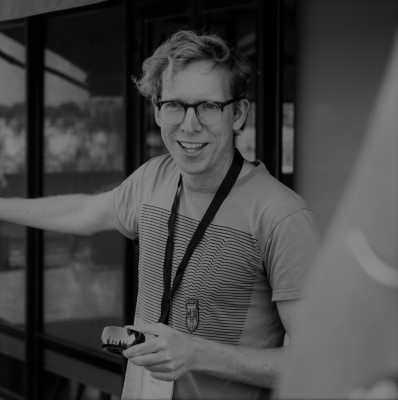 Andy Field is an artist, writer and curator based in London. Field creates formally unusual, interactive projects that invite us to consider our relationships both to the spaces we inhabit and the people around us. Over the last seven years this work has manifested itself across a range of forms and disciplines and in variety of places, from theatres and galleries, to warehouses, multi-storey carparks and the streets of towns and cities around the world.

More recently the focus of his work has been engaging with young people to initiate intergenerational dialogue and new, more radical modes of civic participation through performance, including the award-winning Lookout. Alongside his artistic practice Andy Field has played a leading role in the UK’s experimental performance scene over the last 15 years as the co-director of the award-winning artist-led project Forest Fringe, described by the Guardian as ‘DIY theatre extremists’ and ‘an Edinburgh institution [that] spread its wings around the globe and [has] been hailed as the future of theatre’.

Field has written extensively on art and live performance including for the Guardian’s theatre pages and in more recent years for a range of publications including Contemporary Theatre Review, This Is Tomorrow, The Stage and Exeunt magazine. His academic work, Performance in an Age of Precarity, co-authored with Maddy Costa, was published by Methuen Drama, an imprint of Bloomsbury. Encounterism is his first trade book.

Moving through social, cultural and personal histories as well as science and psychology, queer theory, pop culture and economics, Encounterism explores 12 different kinds of human encounter in 12 essays – from some of the oldest like holding hands and getting your hair cut, to going to the cinema and having a video call – picking apart their meaning in a manner that is playful, analytical and poetic. Field will draw upon his expertise in live performance that uses everyday people from around the world, to consider the choreography of each of these encounters and what they feel like, inviting readers to consider their interactions in the real world with the same precision and detail as carefully managed artistic encounters.